September 12, 2018 / Phoebe Tickell / Comments Off on “Exploring Transition Design and its Relationship to Ecology” – Capra Course Webinar with Terry Irwin

On September 9th, 2018, we held the second in our ongoing Capra Course Webinars: a series of monthly free webinars that we are hosting within the framework of Capra Course. These feature Fritjof in conversation with friends and colleagues about their work and life.

For this webinar, we were fortunate to be joined by Transition Designer Terry Irwin. Terry is the Head of the School of Design at Carnegie Mellon University, Pittsburgh. Her research is in “Transition Design”, a relatively new discipline and area of design research, study and practice that was created by Terry and two colleagues (one is her husband) in 2013.

Transition Design is an evolving and developing field aimed at systems-level change and societal transitions toward more sustainable, long-term futures. In her own words (taken from the webinar): “If we aim for sustainability, then we have to realise that no individual can lead a sustainable life, no organisation, no community can be fully sustainable… Because we’re all interconnected. But we can move towards sustainability – and that’s why ‘Transition’ design is such a powerful concept. There is no end point. Transition Design advocates the co-creation of long term desirable futures with the stakeholders themselves.”

During the conversation, Terry goes into the history of Transition Design, examples of projects, and unpacking how Transition Design relates to systems thinking, ecology, and interfaces with systems such as our education system, or technology. We get a glimpse into the methodologies and practices inherent in the discipline. “Transition Design is like acupuncture,” says Terry. “You study a system, you design an intervention, and then you have to sit back and wait and see what happens.”

At one point Terry speaks about the Theory of Change behind Transition Design, as well as the problem of funding design processes that are not linear, but designing for emergence. Terry says:

“If it’s transitioning, it’s never over. It’s a process of several points of intervention. In this framework things like case studies stop making sense. Our challenge is everyone asks for success stories, but if they were there we wouldn’t have a need for Transition Design.”

Halfway through the webinar, we opened the floor for questions from our audience. These ranged all the way from: “How can we as designers give form to AI designed with a respect for life?” to questions about how Transition Design can be implemented to reshape the education system, to how it could be pivotal to addressing what Fritjof refers to as the crisis of perception. We finished on a particularly relevant and timely question: “I understand the need for development to be organic, but will such organic transition happen fast enough at the scale needed to avoid catastrophic change/collapse?”

Terry is currently working with the 12 Universities and 4 design firms worldwide who are integrating Transition Design into coursework, research strands and professional practice with hope of establishing an international Transition Design Network. To stay up to date on the developments of Terry’s work and Transition Design, you can visit the website https://transitiondesign.net/ and follow the PhD programme at Carnegie Mellon University at https://design.cmu.edu/content/phd. There is also a list of resources gathered from the webinar which can be found in the public Google doc here: https://docs.google.com/document/d/1gWTGZtrt2zXRmYA3YXHHGw2_NKu-qfQYYwzPr6sh7jc/edit.

The webinar reached a total of 74 participants, who were joining us from all over the world… Participants reported calling in from Oregon, Canada, Sweden, the Netherlands, Portugal, Florida, Australia (at 2am!), California, Costa Rica, Texas, Colombia, Germany, Switzerland, Michigan, New York, Austria and Italy… A truly international crowd.

We were honoured to have Terry as our guest and look forward to continuing the conversation on our Alumni Network Platform, where Terry is a member. We’re so excited to be hosting this series and to have such interesting and diverse conversations emerging. Watch this space for our guest next month! 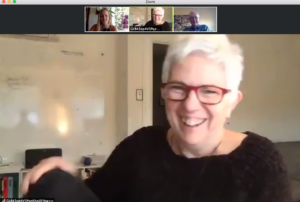 Thank you for joining us Terry!

Hello! My name is Phoebe Tickell and I am the Publicist and Course Development Manager for the Capra Course. I manage the Capra Course blog, social media accounts, partnerships and course development. I can be reached at [email protected] I wanted to also share a little bit more about my background. I have a degree in Biological Natural Sciences from the University of Cambridge, and since graduating have been working to connect the world of science, technology and social change. I teach at Schumacher College, UK, and work on various social change and education projects, with a focus on transformative education and building networks that enable social change. I look forward to the upcoming Capra Course.